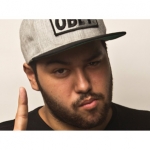 “Deorro’s fast growing and fiercely loyal "PandaFam" fan base is a testament not only to what he’s accomplished in the past few years, but more importantly to the amazing music and moments that are yet to come.” - FB

Over the past two years, Los Angeles native Deorro has become one of the most sought after young producer/DJs in the business. The young house prodigy has amassed an awe inspiring discography including a cache of original productions, collaborations/remixes with Steve Aoki, Chuckie, Axwell, Cazzette, Krewella, Laidback Luke, Carnage, Diplo, MakJ, Tommie Sunshine, & R3hab and more originals than even the most devoted DJs could spin in a week. All of which have been blasted out through Soundcloud to his more than 140,000 followers, amassing over 20 million plays.

Although Deorro initially came to worldwide attention from his prodigious catalog, neither he or his music exist in a vacuum. Equally as impressive as his studio chops is his technique behind the decks. Deorro’s unique grasp on modern party music has led to his services being requested, and received, in some of the top events worldwide. Whether in front of 30,000 in Australia alongside Skrillex and Steve Angelo or at the DimMak WMC Pool Party, Deorro’s fusion of Dutch, moombah, progressive and bass elements illicit revved and raved up reactions without fail. 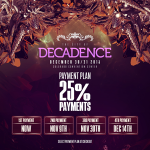 Please note:
· The payment plan option is selected at check-out.
· Payment plan tickets CANNOT be purchased on a mobile device. You must use a computer.
· The expiration date on your card must be later than December 14th, 2015. Please be sure that there are sufficient funds to cover the payments on November 9th, November30th, and December 14th.
· No Tickets will be mailed until all payments are complete

The Payment Plan will be available until November 8th, 2015, subject to ticket availability. Limit of eight (8) tickets per customer under the Payment Plan.

IMPORTANT: If, for any reason, any of your payments are declined, in whole or in part, your order shall be cancelled in full and you will forfeit ALL payments made prior to default. NO exceptions. You acknowledge and agree that, until ALL payments required hereunder are made in accordance with the terms and conditions set forth herein, your participation in the Payment Plan operates only as a ticket reservation and not as an actual ticket purchase. ALL SALES ARE FINAL AND ALL PAYMENTS MADE TOWARD THE PAYMENT PLAN ARE NONREFUNDABLE. 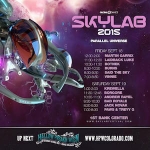 We have nearly reached full power to launch into space on our galactic pursuit to a Parallel Universe, but we can't take off without artist set times to guide us through our mission! Check it out! 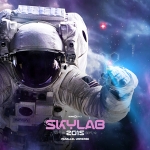 Connect With Us in Space!

Unable to attend our galactic mission, or just want to hold memories of the spacey-shenanigans in photo form? We’ve got you covered! We’re keeping the party going both nights on our social networks. The official festival hashtag is #Skylab2015. Use it to ask questions, find answers, or just to follow along with our epic 2-day mission in space! Connect with us on the Skylab 2015 event page and the Global Dance Facebook Page, follow us on Twitter (@globaldanceprod) and Instagram (@globaldanceUS), and don’t forget to post updates of your Parallel Universe adventure using #Skylab2015 so we can follow along from your point of view. 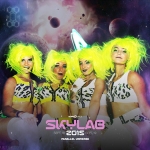 One of our favorite things about Skylab is that the entire venue and all of its inhabitants join in on the outer space theme! This year we have two nights of creative costume opportunities for everyone to get a little spacey as we venture through a world lateral to our own.

We encourage you to join in the celebration and dress up! Grab the glitter, galaxy leggings, or your funkiest inter dimensional space gear and join us September 18th & 19th for an otherworldly mission through sound and space.

Need some places for inspiration? Check out these costume shops to get your creative juices flowing.
The Ritz - Boulder
Wizard's Chest - Denver
Life of the Party - Fort Collins