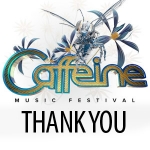 We would like to extend a sincerest thank you to everyone who helped make the 12th annual Caffeine Music Festival a success! Thank you for coming, thank you for participating, thank you for being a part of everything we create. Caffeine is our longest running festival that has paved the way for all other festivals in the state and it truly warms our hearts to see it continue year after year. We hope you enjoyed Caffeine as much as we did and we can't wait to see you again at Global Dance Festival in July! 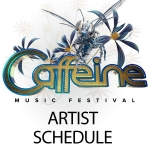 Caffeine Music Festival 2012 is Colorado's biggest spring break party featuring 6 stages and 75 artists! Here is the full artist schedule so you will not miss your favorite acts. Tickets are still available here.

Hailing from Vancouver, Felix Cartal  first burst into the electronic music world in 2009 after the release of his debut EP, 'Skeleton'. He was picked up by Steve Aoki's label, Dim Mak Records, where he released a number of massive tunes, including 'Love' and 'World Class Driver', as well as his debut LP 'Popular Music'. He made a name for himself through a series of killer remixes, such as MSTRKRFT's 'Bounce'. He is one of the industry's most innovative producers, drawing influence from unexpected places like pop music and punk rock.

In addition to his impressive production and remix skills, Felix Cartal is a hard-hitting DJ. His eclectic live sets contain all the right elements to whip the crowd into a dance floor frenzy, from dirty, choppy bass to epic drops. He has played at the world's biggest festivals including Electric Daisy Carnival and Tomorrowland. Check out some of his massive bangers including 'Don’t Turn on the Lights' and 'Domo' for a taste of the energy he will bring to Red Rocks Amphitheater this summer!

As the weather in Colorado warms up and summer approaches, we could not be more excited for the 10th anniversary of Global Dance Festival. Stay tuned for more details and announcements!

So far we have announced Adventure Club, Figure, & Zeds Dead for Sunday, July 22nd of Global Dance Festival 2012 . Today we are excited to add Crizzly to the Sunday lineup!

The next artist announcement will happen at 4pm today!

Crizzly is an up-and-coming dubstep producer who has been taking the world by storm with his crunked-out remixes and high-energy performances. He got his start in San Antonio, Texas, where he began making music and promoting weekly events a few years ago. His first major impact on the dubstep world came in his releases of 'Big Booty Bitchezz'  and his remix of 'Whip My Hair'. Since then, his releases have received major praise by artists around the world. His unique sound combines dubstep, drum step, and rap to form its own genre, 'crunkstep'.

Fresh off his headlining 'Young Gunz' tour, Crizzly is taking over the dubstep world one banger at a time. He has been playing at all the major festivals across the country, while continuing to push out killer tracks and remixes. We hope you're ready for heavy bass and crunkstep on Sunday of Global Dance Festival 2012!

Check out a few videos from Crizzly here:

Morgan Page
Hot off his In The Air Tour (with over 25 sold out dates), Morgan Page has cemented himself as one of dance music's rising stars. Most recognized for his brilliant ability to transfer insatiable pop energy into banging, progressive house tracks, Morgan Page merges punchy beats with catchy melodies to create a high-energy style that fires up dance floors around the world. He is one of the most in demand remixers in the industry, breathing life into every track he touches. He has received two grammy nominations, for 'The Longest Road' and his remix of Nadia Ali's 'Fantasy', as well as a handful of IDMA nominations. With his high-energy, irresistible sound, we can guarantee that you will be dancing from start to finish when Morgan Page takes over the decks.

Here's a couple videos for a taste of what to expect:
-Fight For Your
-In The Air
-Body Work

Mord Fustang
In the past year, Mord Fustang has become a dance music sensation as well as a Colorado crowd-favorite. He self-describes his sound as “An adventurously nude fluctuant immaculate rainbow-coated thunderstorm with arpeggios, 1-up mushrooms and disco basslines, plus a wobble or two. Something like that.” Whatever that means, his style is definitely getting noticed. His sets are described as 'pure energy explosions', incorporating elements of dubstep, trance, and everything in between. We are very excited to experience Mord Fustang's unique style that is taking the world by storm at Global Dance Festival 2012.

The next artist announcement for Global Dance Festival 2012 will happen TOMORROW at 1pm!